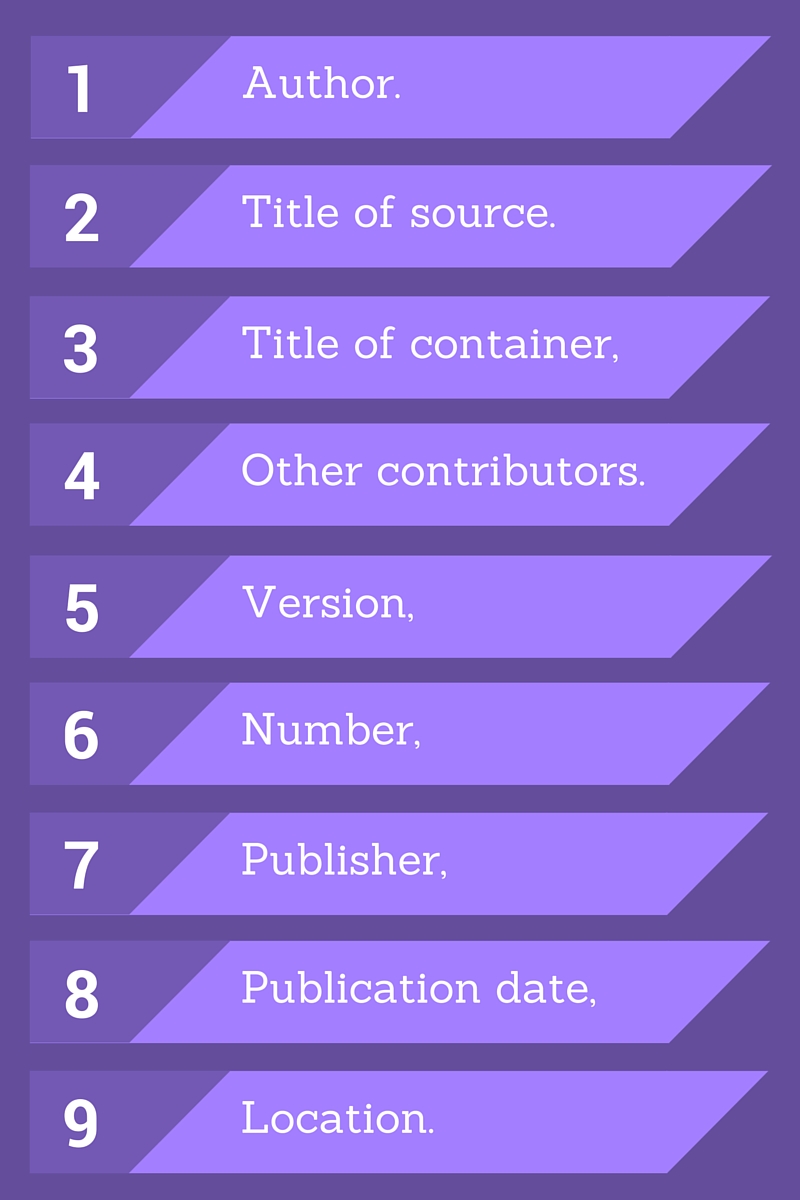 For photographic reproductions of artwork (e.g. images of artwork in a book), treat the book or website as a container. Remember that for a second container, the title is listed first, before the contributors.  Cite the bibliographic information as above followed by the information for the source in which the photograph appears, including page or reference numbers (plate, figure, etc.).

The title should be the first element when citing a film.  Include the director for other contributors, the studio or distributor for the publisher, and the release year for the publication date.

You may also emphasize a particular contributor's work on the film by listing that person as the author of the source.  It is not necessary to list the source this way, but you may do so if your discussion of the film focuses on that individual's contribution.  You may also include actors after the director if their work is important in your use of the source.

Remember to include a link to the video.  To get the permalink in YouTube, click "share" under the video and copy the provided URL, omitting the https://.

In the above example, there are writers and performers listed, so you may choose to emphasize the contribution of one of these people, just as in citing a film or TV show.

You may cite an entire series, or a piece of it, such as a single episode or season.  In the latter case, list the episode or season title/number as the source title, followed by the name of the TV show as the container.

Just as in citing a film, you may choose to emphasize certain individuals' contributions if they are important to your discussion of the episode or series by including them after the title(s).

Cite a recorded episode, such as on a DVD of the series, similarly to a film.  The title of the episode in quotation marks will be the first element, followed by the series title in italics.  In most cases, you should list the person who wrote the episode, and/or the director after the series title.

If you found the episode through a streaming service, such as Netflix or Hulu, include that information at the end of the citation.  If the episode or series is a Netflix, Hulu, Amazon, etc. original, list the streaming service as the publisher.  In this case, list only the URL after the publication date.

Cite an entire series the same as you would a movie.

Begin a music citation with the artist name.  You may cite entire albums or single songs.  Place song titles in quotation marks, and italicize album titles.  List the record label and the release date for the version you used.  You may also need to include information about where you accessed the recording, such as a streaming service like Spotify, or elsewhere online.

If information such as record label or name of album is unavailable from your source, do not list that information.

For objects in a digital archive, start with the creator of the object. If that is not available, start with the title of the object. If your digital archive only gives a description rather than an actual title, use that without [ ] or italics. If there is not a specific date, use whatever the archive gives for a date range. For example, Circa 1600-1620.

Creator of object. Title of object. Name of Digital Archive/website, publisher/org responsible for the website, date, URL of object.